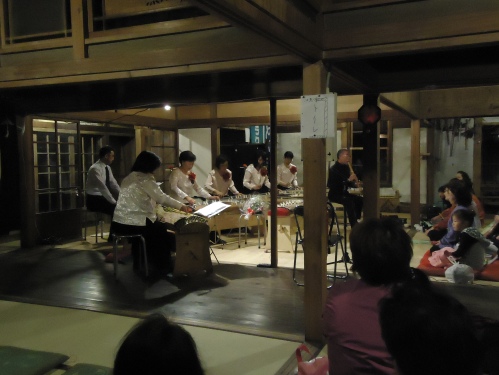 On Thursday, September 22nd, I found myself contemplating how I was going to spend my second three-day weekend in a row. Monday the 19th was Respect for the Aged Day (敬老の日), or “Old Folks Day”, as I like to call it. Then Friday the 23rd was Autumn Equinox Day (秋分の日). Since I worked in the public schools, this meant that I had not only two three-day weekends in a row, but I worked only a three-day week in between. I sincerely love Japan’s national holidays.

The trouble for me was that I hadn’t really bothered to make plans for any of this wonderful free time. The result of my procrastination and laziness was that I didn’t do much of anything on the first weekend; I just relaxed at home, playing guitar, playing Nintendo, and watching rented movies. As I finished up my work on Thursday afternoon, I started to worry that I would again squander value opportunities to really live the Japanese life. Channeling this nervous energy into forward propulsion, I went for a 10k run immediately after leaving the office.

Concluding my run in the usual way, I sprinted past Shakotan’s historic building, called the Yamashime House (ヤマシメ番屋).  The old home of a fishing boss, it originally housed an entire team of herring fishermen. The Yamashime House has since been restored to its old-timey state, and now serves as a heritage site, as well as a venue for the occasional mini-concert. I learned that “Yamashime” is actually just a nickname for the building, symbolized by kanji-like symbol that may have simply been made up. The site was originally called the “Fukui House” (福井家), from the family name of the original owners.

Normally the side street would be deserted, but on this particular occasion, lots of people were gathering. Some men wore happi coats, like you would see at a matsuri (祭り – festival), so I figured that there was a special event happening. After sprinting past the house as a white blur, I walked around the block to cool down, and passed the building again at a normal walking pace.

One of the men in a happi coat ran up to me and told me that a show was going to start in about 30 minutes. When I was slow to understand what kind of show it was, he dragged me inside to get a look at the instruments already set up. A group was going to play the koto (箏), a traditional Japanese string instrument similar to a zither. (It’s kind of like a hammer dulcimer, except this instrument is plucked.) There was no way I was going to pass up such a show.

I hurried back to my apartment and my phone rang; Harima Makoto-san was calling to invite me to come to the koto concert with him. It was wonderful, people in Shakotan were clearly trying to include me in things, and it probably helps that the venue was about 100 meters from my apartment. Skipping my usual post-run stretching, I jumped in the shower, changed, and made it to the Yamashime House five minutes before show time.

The Koto (箏) concert was a lovely, distinctly Japanese, cultural experience. The audience could sit on folding chairs directly in front of the performers, but Makoto-san and I sat on the side, opting to kneel on pads placed on the Tanami floor. The band consisted of five women playing koto, one man playing limited drum percussion, and a bearded gentleman playing the shakuhachi (尺八), a bamboo flute that resembles an alto recorder. The women were dressed uniformly and each had a giant red flower pinned to their shirt. The koto has moveable bridges for its 13 strings, so the women would quickly tune their instruments before starting a song.

Think of the most stereotypical Japanese music you can. Good; that is koto music. The sound of the koto, especially when played together with the shakuhachi, instantly conjures mental images of samurai and feudal Japan. Kneeling seiza style (正座) and enjoying the traditional folk songs was a satisfying “I’m definitely in Japan” moment, and I thoroughly enjoyed it.

Once the performance had concluded, I walked up front to get a closer look at the instruments. The bearded flute player noticed my interest and invited me to try and play one of his shakuhachi. Up close, the shakuhachi is just a carved bamboo shaft, and yet somehow it’s strikingly beautiful in its simplicity. The flute player and Makoto-san were amused by my attempts to make a tone with the flute. After fervent blowing, I was able to generate a piecing screech or two, but I mostly just succeeded and making myself dizzy.

You've learned the Song of Time!

While leaving the Yamashime House, we ran into Yasuda-san, and the three of us decided to get dinner at Heihachi (平八), a delightful izakaya just down the street. We entered the restaurant to a warm reception. Although I’m always recognized around Shakotan, people’s reactions to me have recently changed, thanks to my “One Point” English lessons on the town’s IP phone (ルーカスのワンポイント英会話). The proprietors of Heihachi mentioned “One Point” when they greeted me. I was surprised that everyone seemed to have watched it.

Since I hadn’t seen Makoto-san or Yasuda-san for a while, we got caught up over food and beers. Although Shakotan is famous for its fresh seafood, one very popular dish is fried chicken, and we ate a lot of it. In Hokkaido dialect, fried chicken is called “zangi” (ザンギ), while in the rest of Japan it’s called “kuraage” (空揚げ – くらあげ). At one point, the Heihachi folks asked me what kind of cake I preferred, vanilla or matcha (抹茶). When I chose matcha, they gave me a boxed matcha pound cake, free of charge. It was a fantastic gift.

Matcha cake in a box

While hanging out at Heihachi, we encountered Iwaki-san, my neighbor that lives in the apartment below me. We exchanged pleasantries and Iwaki-san asked me what plans I had for tomorrow. Embarrassingly, I had none, and he invited me to come along with him to an event of some kind. At first, I thought we were talking about a wedding, or maybe just wedding reception, so I jumped at the chance to go. Yasuda-san laughed at my enthusiasm, and explained what the event was a little a better.

The type of party was called “Konkatsu” (婚活), a mixer for single men and women looking for someone to marry. It was going to take place at a resort in Yobetsu, and many of the people would be spending the night. I would be there as part of the staff, helping out the organizers in some fashion. While it didn’t exactly sound like the raucous party I had first imagined, it did sound very interesting, and definitely a unique culture experience. I told Iwaki-san would be happy to lend a hand with their “Marriage Party”. It’s not like I had anything better to do anyway.

2 responses to “Koto at Yamashime House”