Japan is a land of innovation, although it’s not usually the source of the original invention. Japan is unparalleled in its capacity to take existing methodology or technology and improve upon it. Sony didn’t invent the transistor radio, but they perfected it. Nintendo didn’t invent video games, but they utilized the medium so skillfully that it has been elevated to an art form. Toyota didn’t invent the automobile, Toshiba didn’t invent the television; the list goes on and on.  Even Osamu Tezuka (手塚 治虫), the creator of Astro Boy and other classics—often called the “Godfather of Manga and Anime”—was originally inspired by Walt Disney. (That is where the trend of extra big anime eyes started, by the way.) Now Japanese hand drawn animation is the best in the world, has been for decades. In fact, these days Disney focuses almost entirely on CG animation, and then they simply buys the rights to distribute Hayao Miyazaki’s films in the States. If you can’t beat’em, take credit for their work.

I should probably explain that I passionately dislike white bread. If you can appreciate white bread then you will probably dig Japan’s style. But I cannot. I’m pretty sure almost no one in Japan has even a conception of wheat bread.  Japanese bread is super light and ultra fluffy—like you’re eating air. This is the antithesis of my preferred bread; a hearty wheat or multigrain. Some brands have multiple varieties available, but they are all white bread, with names like “Fresh & Soft” and “Sweet & Soft”, which I believe has added sugar.

There’s also an extremely popular style of bread is called “Hotel Bread” (ホテルパン). Hotel Bread is—you guessed it—also white bread. I tried to find an explanation of what makes Hotel Bread different from the others, 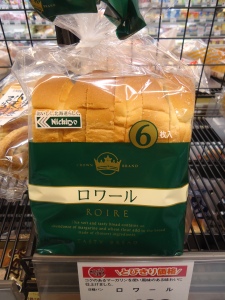 but all I was able to find is that it is similar to the bread you’d get for breakfast in a hotel. OK thanks, glad we cleared that one up.

I’ve actually read blogs where people profess their love for Japan’s bread, comparing it to, and elevating it above, terrible American white bread. This is interesting since Japan’s bread is the distillation and perfection of Wonderbread. And not only is the bread as white and airy as possible, but it always comes pre-sliced in thick, Texas Toast-style slices. I couldn’t use this to make a sandwich if I wanted to.

I had a conversation with my friend Yamazaki-san about Japanese bread, and he was surprised that I didn’t care for it. I explained that I preferred denser, whole grain bread, but I didn’t have the vocabulary to properly express it, so Yamazaki probably thinks that I like hard, stale bread. One key point that he explained to me is that in Japanese homes, bread is rarely use to make sandwiches. Instead, a single slice of bread is considered the main course of a breakfast.

That revealed much of the mystery right there. All the slices are thick Texas Toast-style because one slice—probably with jam or some other spread, and a piece of fruit on the side—was actually supposed to be your whole breakfast. Loaves always contained five of six slices because that would get you through a work week. But why does it always have to be white bread?

I would venture to guess that white bread as a national preference is related to Japan’s preference for white polished rice, but honestly, I don’t know. Fun Fact: the process of making white rice removes many important vitamins and minerals. The lack of vitamin B1 in particular caused an epidemic of thiamine deficiency in the Japanese middleclass in the late 1800’s, which was called “beriberi” (ベリベリ). These days, it is standard practice to enrich white rice with minerals to avoid dietary deficiency issues.

It’s funny that Japan seems to have plenty of artisan bakeries, where you can buy all manner of pastries and cakes and breads, but at the supermarket, white bread is all you can find. After much searching, I was finally able to find a loaf of wheat bread (or something like it) at an Aeon store in Yoichi. While it’s at least brown, it’s still very light and fluffy. Oh well, I think this is the best I can do.

Tagged as just trying to be helpful, movie talk

I’ve got my visa. I’ve bought my ticket. Hotel reservation’s checked. I just worked my last day at Big Fish. Now this trip to Japan is really happening. April 12, 2011 is the day. The final countdown has begun.

As much as I am sure to miss Seattle, I’m not too worried about it because I don’t feel like I’m leaving forever. Sure, I’ll be gone for at least a year, but see Seattle as my home, and I will certainly return. My soccer team, the Rabid Dust Bunnies, will have to play without me for a time, but I’ll be back. (Rabid Forever!)

I was reading an email that Interac (my new employer) sent me regarding flying over to Japan. In one part, it mentioned that every year, there’s somebody who doesn’t reach their destination on schedule due to various reasons, such as “mechanical delays, snow storms, ash clouds and missed connections.” I’m sorry, did you say ash clouds? OK yeah, this is going to be awesome.

If you’re wondering what kind of mindset one has when embarking on a trip to Japan at a time like this, give a listen to my Journey to Japan playlist that I made on Grooveshark. I’ll be listening to this to get psyched up for the trip. Link below:

Now I just need to make final preparations and I’ll be off. Can you dig it?

Are you still going to Japan?!!

I’ve had a lot people asking me if my plans to go to Japan have changed since the cataclysmic disaster caused by the 9.0 magnitude earthquake and subsequent tsunamis. So far, to the dismay of my family, they have not. Interac has told me that my schedule for training in Japan, and my actual placement in Sapporo, will continue as scheduled. So everything shall proceed as planned.

Now, I should clarify that Interac told me that the disaster wouldn’t affect me or my arrival date on March 13th. Since then, the most pressing concern has been the state of the nuclear reactors in the Fukushima Daiichi nuclear plant, which are in such bad shape that authorities are worried about a meltdown. With every new development, I wonder if the company would at least want to change the plans to hold training in Tokyo.

And in case you weren’t aware, my plan is to go teach English in Sapporo, Hokkaido Prefecture, for at least one year. I’ve already bought my ticket and I’m flying out of Seattle on April 12th (arriving at Tokyo-Narita airport on the 13th). I have about a week of training in Tokyo before shipping up north to Sapporo.
Sapporo is like 300 miles north of the devastation in Fukushima Prefecture, on the northern island of Hokkaido. Still, people have voiced concerns that you shouldn’t fool around when radioactivity is involved, so everyone’s kind of worried. I have yet to receive my work visa from the Japanese Consulate, so we’ll have to see what happens. Can’t teach in Japan without it. Stay tuned more more action.

Welcome to Rebel Without a Tan, my new blog. I’ll swear I will put up some content at some point. Until then, here’s a YouTube video of my first time doing stand up.

Yeah, that’s good times. I think I’ll do more stand up one day. Probably after I write some new material and stop ripping off my dad’s jokes.

Tagged as stand up